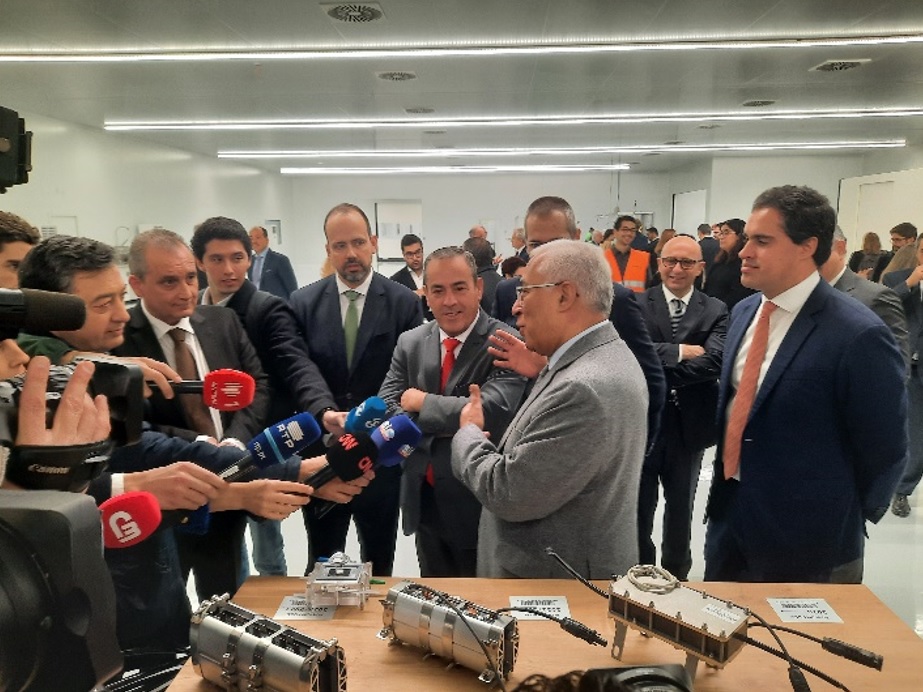 SABUGO, Portugal, Jan. 11, 2023 (GLOBE NEWSWIRE) -- Fusion Fuel (NASDAQ: HTOO) announced today that the company welcomed a delegation including Prime Minister António Costa, Mayor of Benavente, Carlos Coutinho, Secretary of State for the Economy, Pedro Cilínio, and Secretary of State for Energy and Climate, Ana Fontoura Gouveia, along with representatives from the Portuguese Agency for Competitiveness and Innovation, I.P. (‘IAPMEI’) and the Municipality of Sines to its Benavente electrolyzer factory yesterday morning. The site visit was part of a country-wide tour of the fifty-one consortia that were approved for financing through Component 5 (“C-05”) of Portugal’s National Recovery and Resilience Plan. The company had previously announced that its consortium, the Sines Green Hydrogen Valley Alliance, had been approved for €36 million in C-05 funding late last year. Several consortium members were also in attendance.

The visit began with a tour of the Benavente facility and HEVO micro-electrolyzer production lines led by members of Fusion Fuel’s executive team – Andre Antunes, Jaime Silva, and Frederico Figueira de Chaves. This was followed by an institutional event for the Sines Green Hydrogen Valley Alliance, which featured speeches by Fusion Fuel’s Pedro Caçorino Dias, Portugal’s Secretary of State for the Economy, Pedro Cilínio, and Portugal’s Prime Minister, António Costa. The event concluded with a ceremony formally recognizing the approval of the Sines Green Hydrogen Valley Alliance for C-05 funding.

Pedro Caçorino Dias, Fusion Fuel’s Head of Portugal, who leads the consortium, commented on the visit: “It was a great honor to welcome the Prime Minister and members of his cabinet to our world-class electrolyzer factory in Benavente and introduce the groundbreaking work underway here. Our HEVO micro-electrolyzer technology lies at the heart of our differentiated offering, enabling us to build a market-leading position in Portugal. While we are moving quickly to establish a footprint in strategic markets worldwide, Portugal remains a core market and we remain committed to championing Portugal’s green hydrogen ambitions. Including the most recent C-05 award, Fusion Fuel has now secured over €55 million in grants from the Portuguese government across several funding programs, a powerful representation of Portugal’s commitment to establishing itself as a global leader in the new energy economy. We want to take this opportunity to recognize our partners in the consortium and everyone who contributed to this important milestone.”

Reflecting on the visit, Prime Minister António Costa spoke following the ceremony: “The national economy continues to develop with a bet on reindustrialization and this example, of Fusion Fuel, is an excellent example of reindustrialization of the country. We have here a facility that was closed ten years ago and that today is in activity; that once produced metallic structures for civil construction and now produces highly innovative technology for the production of green hydrogen. It will create new jobs and in itself produce a new value chain. Moreover, it also contributes to CO2 emission reductions.”

“The C-05 Agendas do not ‘only’ value the energy component, nor ‘only’ the environmental component. This is a true catalyst for the creation of qualified jobs and for a true reindustrialization of the country. All of the main components of this project are produced nationally: they are the result of national research, have national patents, and meet another fundamental objective, which is to promote our export capacity based on our major competitiveness advantage, which is our ability to innovate.”

“The most challenging program in the Recovery and Resilience Plan (‘RRP’) is the Mobilizing Agendas, which shows that it is possible to do more and better for the growth of our economy. The RRP funds are reaching companies and there are already 93,000 projects approved. Fusion Fuel, which I visited here today in Benavente, is one of the 93,000 approved projects. And this is an excellent example of the application of RRP funds aimed at capitalization and business innovation. This is how we realize the ambition of being a more developed, more prosperous, more fair country, capable of creating more and better jobs and capable of strengthening territorial cohesion.”

Fusion Fuel is an emerging leader in the green hydrogen sector committed to accelerating the energy transition through the development of disruptive, clean hydrogen solutions. Fusion Fuel has created a modular, integrated solar-to-hydrogen generator, powered by a proprietary miniaturized PEM electrolyzer, that enables off-grid production of green hydrogen. Its business lines include the sale of electrolyzer technology to customers interested in building their own green hydrogen production, the development of turnkey hydrogen plants to be owned and operated by Fusion Fuel, and the sale of green hydrogen as a commodity to end-users through long-term hydrogen purchase agreements. For more information, please visit https://www.fusion-fuel.eu

A photo accompanying this announcement is available at https://www.globenewswire.com/NewsRoom/AttachmentNg/16e8298e-8dec-41be-a1c1-566a93aab10f